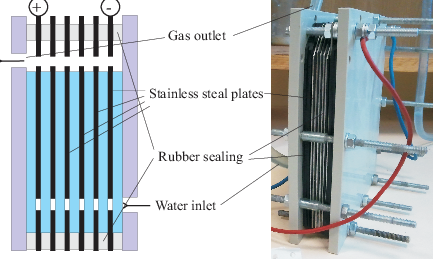 Three closely related R+D project was formed based on the research directions in the sub-project.

In the R+D project „Optimal operation and control of energy producing generators and wind turbines” control theoretic methods has been applied for electromechanical systems with energetic applications. Synchronous generators were the primary field of interest
As the synchronous generators applied in power plants are working in continuous mode and their excitation consists of step-like reference changes day-night and night-day load changes. The application of so-called sufficient excitation necessary for system identification (e.g. PRBS signals, or white noise) is impossible because of the nature of the plant, consequently, the results of parameter identification are not precise enough. To avoid this problem, LQ optimal state feedback controller has been designed for a previously built and identified synchronous generator model. Afterwards, the control aim has been extended with active and reactive power reference signal tracking capabilities. This aim has been met by designing an LQ servo controller that manages to track load change-like active and reactive demand signals.

The R+D project „Optimal design, operation and control of energy producing units supported by renewable energy sources (solar, wind, etc.)” resulted in optimization based complex control methods for the integration of renewable based electrical energy into the low voltage power grid.
As one part of the R+D project the dynamical simulation model a complex energetic system has been built which enables us to simulate the behavior of a local power network (transformer area) containing a small domestic power plant. A complex control structure has been developed and implemented on the model. The main idea of this control system is to integrate renewable energy into the electrical network in such a way, that the power quality norms (total harmonic distortion, power factor) improve, thus the losses and CO2 emission decrease and the operation stability of the network increase.
The central element of the controller is the upper harmonic controller which decides the amplitude and phase of the injected 3,5,7,9,11th upper harmonic current component in each control step by an asynchronous parallel pattern search algorithm. This control algorithm only modifies the operation of the presently applied grid synchronized inverters, no new system elements are needed to their application, i.e. they will represent very small investment costs in a possible future implementation. The constructed control system is able to work in several operating modes according to what type of elements are present in the network (e.g. battery, biodiesel generator, etc.).
Another scope of the R+D project was the question of storing the actually unused electrical energy. In this aspect, we used dry HHO cell for producing Hydrogen gas using the unused electricity under controlled circumstances.

The results have been documented in 8 research papers in English in referred journals, in numerous papers in national and international conference proceedings. Student research papers and diploma works have also been written from the outcomes of the work.
Three team members, Gábor Balló Péter Görbe and Attila Fodor (as a doctoral candidate and two early career researchers) has been used the results of the sub-project in their PhD thesis.