An optimization based lithium-ion battery parameter estimation method has been proposed in this research that is capable of describing the thermal behavior of batteries. The base of the method is a nonlinear charge and discharge model which describes the temperature dependency as a parametric function of temperature as an external variable. Parameter sensitivity analysis has been carried out on the model to find the parameters to be estimated, that are the electrode potential, the battery capacity, and two polarization constants. The internal resistance was found to be non-sensitive to the model output, thus it was not estimated. The proposed parameter estimation method contains two steps. At first the parameters E0,Q, K1, K2 are estimated from measured data of charging/discharging at different constant ambient temperatures. In the second step the temperature coefficients of these parameters are estimated.
The proposed parameter estimation method is verified by a set of simulation experiments on an electro-thermal battery model capable of describing the thermal behavior of the battery. The
temperature dependent parameter characteristics obtained generated by the proposed method can be used as a computationally effective way of determining the key battery parameters at a given temperature.
Further research directions include the use of this parameter estimation method for determining the state of health of the battery, and to estimate the temperature dependent state of charge during its life cycle. This is possible through a suitable experiment policy that estimates the battery capacity from well chosen charging operations.

Experiment design that is optimal for battery aging estimation

A simulation based optimal design of battery charge/discharge experiment is aimed by this research. The base of the method is a nonlinear charge and a discharge model and two possible input signal families, PRBS charging current and CC-CV cycle, respectively. The optimality of the experiment design has been investigated with respect to the estimated trace of  the covariance matrix and the measure of unbiasedness of a nonlinear least squares parameter estimation. The results show that the different modes of a hybrid model perform differently.

The second important question was the excitation performance of the two possible input signal families, PRBS, and CC-CV. It was shown that the estimator is unbiased for both inputs. A set of experiments has been performed to analyze the statistical properties of the estimator for different parameters of the two excitation signal families. The results show, that the estimate of the covariance matrix trace norm does not really depend on the excitation parameters neither in the PRBS, nor in the CC-CV case. However, the CC-CV excitation gives an average value for the trace norm of 0.12 as opposed to the average 0.14 for the PRBS excitation. The Euclidean distance between the actual parameters (R and Q) and the estimate for
dierent excitation parameters has also been generated as an indicator of the unbiasedness of the estimator. The results show, that the only parameter that has any effect on the unbiasedness is imax in the CC-CV cycle. So it can be stated that the CC-CV excitation outperforms the PRBS input in both criteria (covariance and unbiasedness). 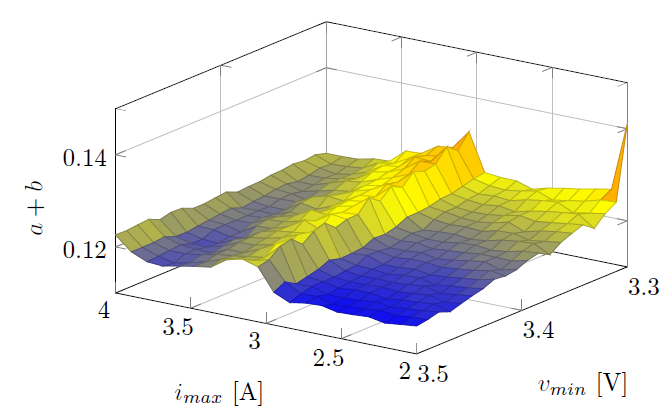 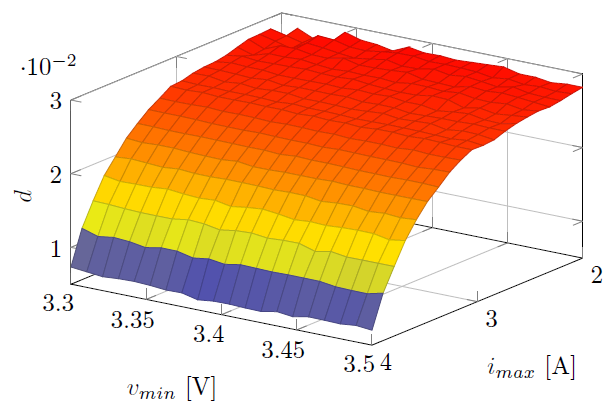 The future work is twofold. One of the possible directions is to involve parameters E0 and K to the experiment design since they can also hold information about battery health. On the other hand, the method developed is valid only at one point of the battery life. It cannot even be stated that the same input signal is the best for a half-used battery than that for a new one. That is why further experiments will be performed to analyze this phenomena along the battery life.